This Fairey Swordsman 33 Aft Cabin motor yacht benefits from the original Mk I low profile aft cabin coachroof which means that unlike the more modern boats the deck is an extension of the cockpit entertaining area. This unique feature is more akin to an aft cockpit boat however with the benefit of an aft cabin for occasional guests, sleeping six in aft cabin, convertible saloon and V berth forward.


White Swordsman was built in 1964 and as Swordsman hull #2 is a truly original and iconic Fairey Marine boat having won numerous concourse awards and being admired by many as one of a kind.


Gordon Procter her former owner recalled having bought her in 1969 from Peter Twiss, the former World air-speed record holder, and head of sales at Fairey Marine. Then taking a berth in Yarmouth Harbour - how she soon became known as the most used boat there. She was indeed fully occupied, plying not only the Solent but beyond to the Normandy ports and Channel Islands. It was a good life done in style with much fun, food, good wine and sport, whether water-skiing, paragliding and then - not least; racing.

In 2006 her surveyor said " nearing completion of an extensive re-fit and all work is to a high standard. It is my opinion that this vessel is without doubt one of the best of her type around .


Swordsman hulls were made with 2.5 mm thick laminations of Agba mahogany; continuous from keel to gunwale.

The bottom was constructed with nine laminations and the topsides six. Agba was preferred for its high resistance to splitting and its ability to bond well with the Borden one-shot waterproof glue.

The process began with initial layers of Agba stapled to the hull mould. Subsequent laminations were then applied, glued and positioned with staples those to be extracted from the under skin before subsequent layers were laid over.

Before placing in the oven, the entire assembly was enclosed in a thick rubber bag. Under vacuum, the bag was pulled tight over the hull s surface and the whole assembly rolled into the autoclave. Steam in the oven raised the temperature to 100 degrees C at a pressure of around 50 psi for around half an hour. Thus the truly waterproof glue impregnated the wood completely, enabling the layers to amalgamate well without the need for a lot of staples and an extremely resilient hull was formed and left to cure for a week or so.

The superstructure is also of laminated wood while the decks are teak planked and cover boards are varnished teak.


Nicolle Associates offers the details of this vessel in good faith but cannot guarantee or warrant the accuracy of this information nor warrant the condition of the vessel. A buyer should instruct his agents, or his surveyors, to investigate such details as the buyer desires validated. This vessel is offered subject to prior sale, price change, or withdrawal without notice.

This vessel is VAT not applicable.
As always photographs do not do justice so a viewing is highly recommended.
This boat is lying in Denia, Spain.
2016 Nicolle Associates 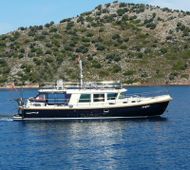 Boats for sale
by continent

Boats for sale
by country